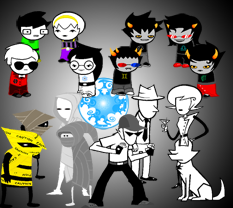 So there's four kids. Each of them has a parental guardian, an exile advising them, and an internet troll to hassle them.
Advertisement:

Let's say you have a large cast and you don't want to do a Love Dodecahedron. How do you keep track of all your characters, while still making your desired points? One way is to take your central character grouping and duplicate it with groups of contrasting characters. Do this a few times and the copies can even provide contrast and commentary on each other without reference to the main group.

Most of the time, you will be replicating your "core" grouping with a Similar Squad. If you have a romantic couple, then you provide other couples with different problems and reactions. If your Main Characters are Heterosexual Life-Partners, bring in more pairings (most cop shows). If you have a Power Trio, build another one. Compare the Five-Man Band with The Psycho Rangers. Throw in a group of Evil Counterparts, too!

Named for a geodesic dome, a half-dome structure built out of triangles. Notable for being stronger the bigger it is made.