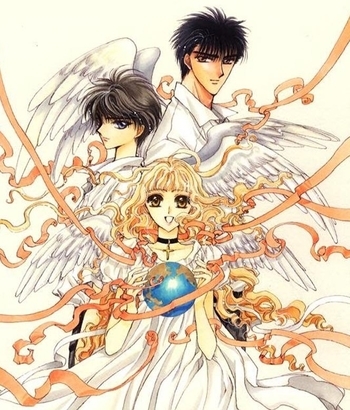 Kamui, Kotori and Fuuma.
"The future hasn't been determined yet, right?"
— Kotori
Advertisement:

One of CLAMP's longest-running manga (stalled at 18 volumes out of a planned 21 since 2003, with a few further chapters making a "Volume 19" never published in a tankoubon), X is the story of Kamui Shirou - a boy destined to save the world... or destroy it. He is drawing the Dragons of Heaven, who are attempting to preserve the world as it is, and the Dragons of Earth, who wish to eliminate humanity's taint, to Tokyo. Guided by Hinoto, a dreamseer (yumemi), the Dragons of Heaven attempt to preserve the seven barrier structures situated around Tokyo. Kamui must decide if the world is even worth saving, and then choose sides... But what of the dreamseer's prophecy that there is another Kamui?

Note about the title: the original title of this series is simply X. The manga was retitled as X/1999 for release in America by Viz to prevent confusion with an American comic book series also named X.note Viz's onmibus rerelease of the manga, though, goes back to simply being called X. The 1999 portion comes from the year the story takes place.

There are actually two separate animated versions of X: the 1996 movie, which is a great deal of action and way too much information compressed into an hour and a half, and the 2001 television series, which at 24 episodes had more time to actually develop the plot and featured a very different ending. Both are missing elements from manga chapters produced concurrent or following their release, suggesting yet a third very different ending... which may never actually materialize.

The characters of Subaru, Seishirou and Hokuto originated from another CLAMP manga, Tokyo Babylon. Although it is sometimes referred to as such, Tokyo Babylon is not a Prequel, since the series predates X and the stories are independent. It is, however, helpful to know the plot of Tokyo Babylon before reading their subplot.

"Forever Love" by X Japan (which also used to go only by X before they hit it big outside Asian market) was written as a theme song for this anime, and is the ending theme for The Movie.

Not to be confused with the 4X Space Simulator series X, the Nintendo tank game X, a reploid, the Los Angeles punk band X, or the Japanese band X Japan.