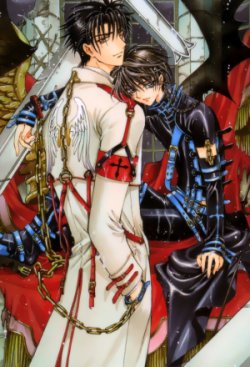 Kamui and Fuuma don't seem to mind the chains...
"Come to me, cover me, hold me
Together we'll break these chains of love."
— Erasure, "Chains Of Love"
Advertisement:

An Anvilicious version of the Red String of Fate, Chains of Love are often utilized in manga artwork, especially in Shoujo and Yaoi. Used to indicate that two people are "bound" together literally and often unwillingly, perhaps suggesting that one of the two is the "old ball and chain" to the other. Often used to generate sexual tension between the chained parties that may or may not progress into Slap-Slap-Kiss depending on the plot.

May overlap with Because Destiny Says So and What Do You Mean, It's Not Symbolic? If used in a villainous or negative way, this often overlaps with Bondage Is Bad.

Alternately can be seen as bits of cloth, thorns, or in one case, red wires, an amalgamation of the Chains and Red String that's possibly even more Anvilicious than the two separately.

On the non-symbolic side is the Chained Heat plot. See also Slave Collar.