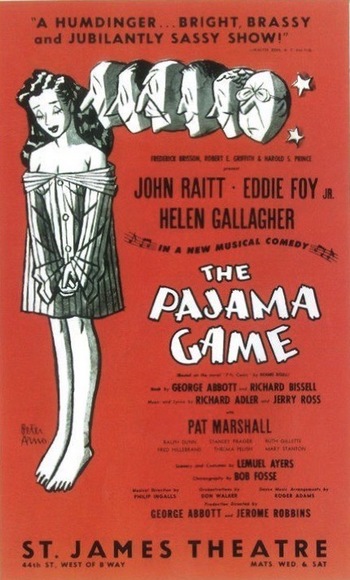 The Pajama Game is a Broadway musical scored by Jerry Ross and Richard Adler, based on the novel 7½ Cents, by Richard Bissell.

The plot: workers at the Sleep-Tite pajama factory are demanding a seven-and-a-half cent salary increase. Caught in the middle of this labor/management dispute are Katherine "Babe" Williams and Sid Sorokin, Star-Crossed Lovers stuck on opposite sides of the conflict. Can their relationship survive the negotiations?

The original production ran from 1954-1956, winning three Tony Awardsnote Best Musical, Best Featured Actress in a Musical (Carol Haney), and Best Choreographer (Bob Fosse), and there have been two revivals since: one in 1973, and another in 2006 (which won another two Tony Awardsnote Best Revival of a Musical and Best Choreography and was nominated for an additional seven). A film adaptation was released in 1957, starring all of the original Broadway cast except for Janis Paige (Babe), who was replaced by Doris Day. Both the film and original stage productions featured choreography by Bob Fosse.

The Pajama Game contains examples of: