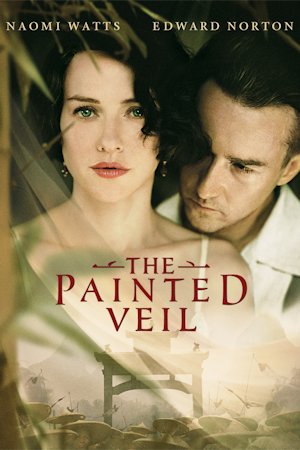 The Painted Veil is a 2006 drama based on the novel of the same name by W. Somerset Maugham and stars Edward Norton and Naomi Watts.
Advertisement:

Kitty Garstin is a shallow socialite who decides to marry boring bacteriologist Walter Fane when she finds that she's out of suitors and her mother pushes her to make the match. Walter's work takes him to Shanghai, and there Kitty settles into married life and embarks on an affair with Charles Townsend, the married British vice consul. Walter discovers the affair and offers Kitty two options: divorce on the grounds of adultery, or she can go with him to a small village out in the country where a cholera epidemic is in full swing. Realising Charlie won't leave his wife for her, Kitty accompanies Walter to the village, where she is forced to confront her previous illusions about Walter and herself.