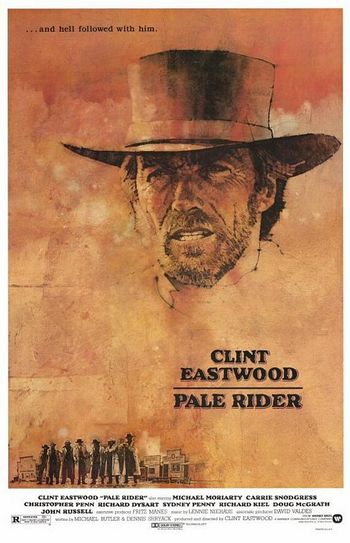 "And when he had opened the fourth seal, I heard the voice of the fourth beast say, Come and see. And I looked, and behold a pale horse: and his name that sat on him was Death, and Hell followed with him."
— Revelation 6:7–8 (KJV)
Advertisement:

A gunslinging drifter befriends a determined frontier family and is especially idolized by their child. Their livelihood is threatened by a bigger, more powerful company that seeks to drive them off their land by either force and intimidation, or simply buying them out. The Drifter fights for the family and defeats the Corrupt Corporate Executive and his mooks, but ultimately leaves his friends behind and continues a life of drifting.

No, this is not Shane. This is Pale Rider, a 1985 Western directed by and starring Clint Eastwood. Eastwood is cast as a Preacher With No Name who crosses paths with a band of hapless gold miners hoping to strike it rich. The miners are often harassed by thugs hired by LaHood (Richard Dysart), the Corrupt Corporate Executive of a local mining company, who hopes to drive them off the land.

Most of the miners are about to give in—except for spunky protagonist Megan, her mother, and their friend Hull Barret (Michael Moriarty)—when the Preacher shows up. The Preacher intervenes on Hull's behalf, saving him from LaHood's mooks. With some convincing from Hull and Megan, the rest of the miners unite behind the Preacher against LaHood. Unfortunately, LaHood also recognizes the threat posed by the Preacher and in retaliation he hires Stockburn (John Russell), a corrupt marshal with a deadly posse. It seems as though Stockburn and the Preacher have a history.

The film is notable for being one of the very few Eastwood films to have strong religious and supernatural overtones. Many of its elements are derived from or similar to earlier Eastwood Westerns, namely The Dollars Trilogy and High Plains Drifter.