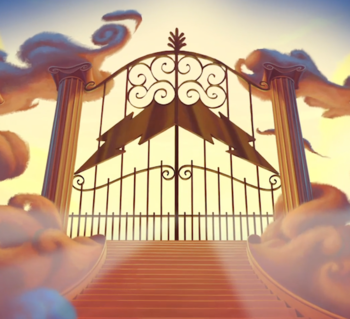 Cue Cherubic Choir.
The twelve gates were twelve pearls, each gate made of a single pearl. The great street of the city was of gold, as pure as transparent glass.
— The Bible, Revelation 21:21
Advertisement:

The Pearly Gates — when not used as a Sexual Euphemism — is common shorthand to describe the outer walls that separate paradise from the rest of the cosmos. Despite the trope name, the gates are more often golden than pearl-colored. There is usually a book-keeper at the door, typically either St. Peter or a similar Heavenly bouncer, who decides who gets in, typically by reading their deeds from a large book and judging whether they've been good enough to deserve entrance into Heaven. The gates will open for those who earned their place, while everyone else will find themselves standing on a Trap Door leading to the less than ideal alternative.

When what lies on the gates' other side is actually shown, it's almost always a Fluffy Cloud Heaven.

Sub-Trope of Cool Gate. Compare with Gate of Truth, Portal Network and Tannhäuser Gate. For entrances to the other place, contrast Hellevator and Hellgate.