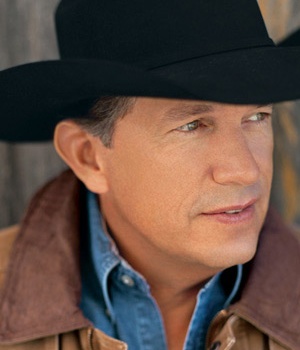 George Harvey Strait (born May 18, 1952 in Poteet, Texas) is a popular country music performer, sometimes known by the Fan Nickname "King George." He holds the record for the most #1 hits by any artist (44 on Billboard Hot Country Songs, 60 on all major country music charts), and all but two of his twenty-six studio albums have sold platinum or higher, putting him second to only Elvis Presley for the highest-certified male artist in any genre.

Strait is also known for his remarkable consistency: almost all of his albums have generally been released to positive reviews, and from 1992 to 2015, he has worked with the same producer and largely the same session musicians. He's even been on the same label, MCA, since 1981.

He would probably be The Ace of country music if not for his easygoing, everyman demeanor. Since 1981, he has always been a cleancut guy in a cowboy hat and pressed shirt, and has been heralded as one of several musicians who brought country music back to a more traditional sound following the crossover-happiness of the late seventies-early eighties. He certainly has the cred for no-frills, neotraditional country, as before he made it big, he played in various gigs in his native Texas with his Ace in the Hole band.

Strait's music is also known for its relative lack of gimmickry: he almost never records duets, novelties, or sappy love ballads ("I Cross My Heart" notwithstanding). On the flip side, he has almost always relied on outside material, with his 2009 single "Living for the Night" being the first single of his career that he has had a hand in writing. Furthermore, he is known for rarely recording music videos.

In 1992, Strait made a brief foray into acting, starring in the film Pure Country, in addition to recording its soundtrack. While the soundtrack produced two #1 hits for him and is his best-selling album, the film was not very-well received by critics.