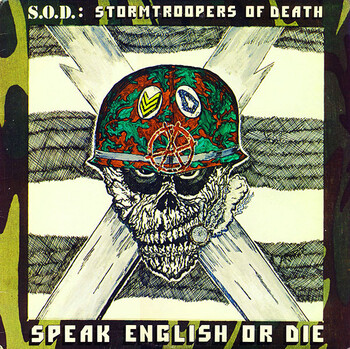 "SARGENT D IS COMING, AND YOU'RE ON HIS LIST!" 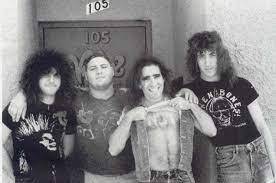 Stormtroopers of Death or S.o.D. were a crossover thrashnote an often fast and abrasive mixture of Thrash Metal and Punk Rock that emerged from both scenes during the 1980s band from New York that formed in 1985 and was sporadically active until splitting for good in early 2002. The band was the side project and brainchild of Anthrax guitarist Scott Ian, who recruited Anthrax drummer Charlie Benante and ex-Anthrax bassist Dan Lilker, as well as local vocalist Billy Milano. It spawned after Scott Ian drew several comics depicting a character he called Sargent Dnote Yes, "Sargent" is not the proper spelling of the word, but the mistake has since become part of the brand while out on tour during the winter of 1985. Later, shortly after recording his parts for Anthrax's Spreading the Disease album, he wanted to publish a full comic book featuring Sargent D, but since he didn't know how, he opted instead to write songs about the character. Although still true to his thrash metal background, the riffs he wrote also incorporated influences from local hardcore punk acts such as Agnostic Front, and his the lyrics (mainly written from Sargent D's perspective) took on a similarly tongue-in-cheek punk tone. After calling up some of his friends to play his material with him, the newly formed S.O.D. finished work on their debut album in just under a week.

The band's music is an inhumanly fast and crushingly heavy Epic Riff-driven affair (especially by the standards of the time) straightforwardly designed to mosh to as their punk influence would suggestnote By virtue of this, their songs tend to be on the very short side, with their absolute longest studio track clocking in at only 3 minutes. Their lyrics are infamous for their vulgar tongue-in-cheek humor and being very, very offensive by intention, with the title of their debut album Speak English or Die serving as a prime example. However, Milano's vocals are so incomprehensibly fast they put some rappers to shame, and luckily the most offensive portions of their lyrics are largely unintelligible. The band has also stated that none of their lyricism is intended to be taken seriously and is actually supposed to satirize the petulantly nihilistic attitudes they portray, although some still thought the band to be legitimately racist and sexist at the time.

Despite having only two half-hour studio albums to their name, the band were very influential among many metal and punk circles (they are credited as being one of the pioneers of crossover thrash) and their debut LP is still held up as a masterpiece of thrash metal riffage.