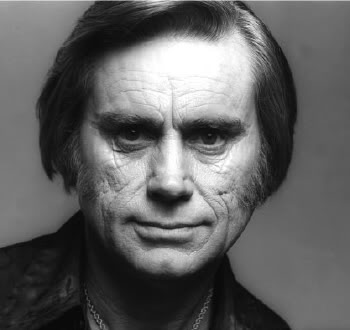 "If we could all sing like we wanted to, we'd all sound like George Jones."
—Waylon Jennings
Advertisement:

George Glenn Jones (September 12, 1931 – April 26, 2013) was, to say the least, one of the most important Country Music singers of all time, and given his influence on a large number of very important rock-and-roll singers, was arguably one of the most important pop singers as well. Active from the early fifties to his death in 2013, he has had an incredibly fruitful career that includes nearly 170 single releases in all. He is widely regarded as one of the most skilled and distinctive vocalists in country music history, and is considered by many country music artists and scholars to be the greatest ever.

Among all of his songs, "He Stopped Loving Her Today", a song written about his break-up with his then-wife Tammy Wynette, is often cited as the best country music song of all time. (Ironically, its only real competition for the title is "Stand By Your Man" a song Tammy Wynette wrote about her relationship with Jones). Others, such as "A Good Year for the Roses" and "The Grand Tour", have attained legendary status in country music canon.

Jones first recorded for Starday Records in the 1950s, followed by stints on Mercury, United Artists and Musicor. He was no stranger to the troubles that often plagued A-list musicians in his time, either. By 1968, he began drinking heavily and missing shows. His marriage broke up, but he soon wed fellow singer Tammy Wynette, with whom he would record a large number of duets. A dispute over the label's rights regarding duets between the two led to him jumping ship for Wynette's label, Epic Records, where he would stay from 1971 until 1990.

This change in labels also shifted him to a more ballad-oriented sound, with which he would stick. After he and Wynette divorced, Jones started hitting the bottle and cocaine, causing him to miss more shows and earn the Fan Nickname "No-Show Jones." He went to rehab, but it didn't do much until 1983; nonetheless, the hits kept coming until the end of the decade. By 1990, a switch to MCA brought a couple of critically-acclaimed albums but no hits. By the time he moved to Asylum Records in the end of the decade, his traditional sound was highly out of favor against the crossover-happy sound still present today. Nonetheless, Jones left a massive influences on the neotraditionalist acts of the eighties, and his songs are widely recorded to this day. In terms of influence and lasting impact, he is arguably the second most important male country artist after Hank Williams.

George Jones passed away on April 26, 2013 after being hospitalized for over a week for a fever and irregular blood pressure.