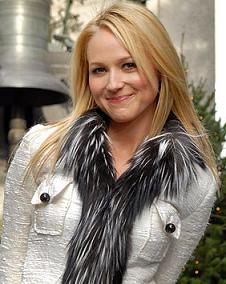 I'm just a simple girl/In a high tech digital world
"I would always encourage people of any age not to be so quick to follow other people's truths but to search and follow your own moral code and live by your own integrity, and mostly just be brave."
Advertisement:

Jewel Kilcher (born May 23 1974 in Payson, Utah), better known by just her first name, has been singing solo professionally since early 1995, with the release of her CD Pieces of You, which went platinum twelve times, becoming one of the best-selling debut albums of all time. "Foolish Games", a single on this CD, held the record for the longest chart run of a single (sixty-five weeks), and still holds the second-longest chart run. (1995-present)

She has since released other albums, including a few shifts in musical style, which led to varying degrees of success. It should be noted that the main offender of this, her album 0304, debuted at at number two on the Billboard 200 and quickly went gold. Her later albums have suffered the opposite, most notably the foray into Country Music with Perfectly Clear and Sweet and Wild.

Characterized by guitar and folky sounds as well as wordy lyrics and imperfect rhymes, Jewel also has released two books, a poetry book and an autobiography. She has also starred in the movie Ride with the Devil, and has guest-starred on numerous TV shows. She serves as a judge on The Sing-Off starting in Season 4. She's also a well-known philanthropist, donating a portion of her income Higher Ground for Humanity

, as well as being a spokeswoman for the group Stop Breast Cancer for Life.

She currently lives in Stephenville, Texas.