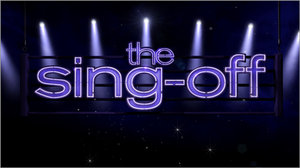 The Sing-Off is an American Reality TV singing competition featuring a cappella groups. It premiered on NBC on December 14, 2009, and was cancelled for a couple years after its third season.

A cappella groups are chosen by audition and advanced in the competition based on judges' eliminations until the finale, where the winners are determined by viewer votes. Season 4 changed this to the judges choosing the final winner. The winning group receives a cash prize and a Sony Music recording contract.

Unlike many other music-based TV competitions, all the groups viewers see from the start of the season are made up of excellent musicians, and the entertainment value comes from the music itself rather than schadenfreude over poor performers. The judges (especially Ben Folds) often offer in-depth musical critiques, making the show a treat for knowledgeable musicians as well as general fans. Various wrinkles have been introduced into the formula, such as a genuine "Sing-Off" where two groups collaborate and compete on the same song. Season 5's wrinkle was that the entire "season" was a two-hour special, aired in its entirety on December 17, 2014; of the six groups featured, half of them sang only one song before being sent home.

It's hosted by Nick Lachey (formerly of the Boy Band 98 Degrees); with judges Ben Folds, Shawn Stockman (of the R&B vocal group Boyz II Men), and various women in the third seat: Nicole Scherzinger in Season 1, Sara Bareilles in the second and third seasons, and Jewel in Seasons 4 and 5. For Season 5, Folds was not available due to his touring obligations; Fall Out Boy's Patrick Stump was brought in instead.