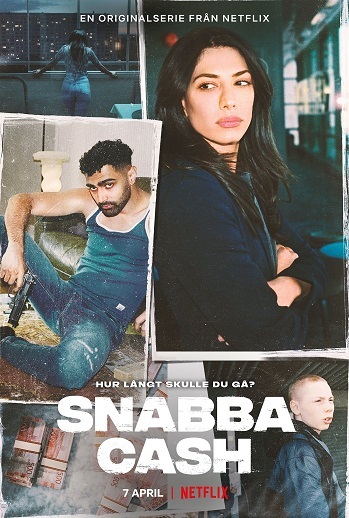 Snabba Cash is a 2021 Swedish crime-drama series from Netflix. It follows the young, ambitious businesswoman Leya who has a son called Sami with a deceased drug dealer. Leya used to be a part of the world of crime but decided to become an entrepreneur and founded the tech-company TargetCoach. Sami's uncle, Ravy is a drug lord who gets into debt with his supplier and relies on Leya to help him. It also follows Salim who is a member of Ravy's gang, but has goal to leave the criminal life style for good. He also engages a romantic relationship with Leya. Then there's Tim, a troubled teenager who wants to become a gangster and eventually starts working as a drug dealer for Ravy's gang. But due to his young age, nobody takes him serious.