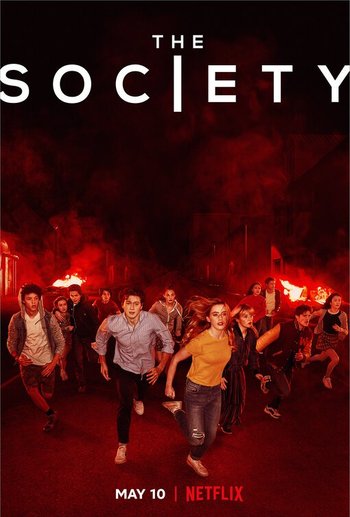 "I went to the woods because I wished to live deliberately, to front only the essential facts of life, and see if I could not learn what it had to teach, and not when I came to die, discover that I had not lived."
— Henry David Thoreau, "Walden, Life in the Woods"
Advertisement:

The Society is a mystery fantasy teen drama on Netflix.

The show begins in the small, affluent, and peaceful town of West Ham, which has been having issues with a strange and foul smell floating around. Pending a solution, the town’s high school sends its students on an overnight field trip. However, the trip is abruptly cut short, and the returning students find the entire town deserted. Even stranger, all communication with the outside world is gone— the internet is disconnected, phones only have local service, the buses that returned them seem to have disappeared, and a seemingly endless forest has surrounded the town to prevent anyone from leaving physically.

Trapped together and alone, the teens have to form their own society in order to survive the elements and each other, all while trying to find a way home. Think of a modern, teen, and more paranormal Lord of the Flies.

The series premiered May 10, 2019. A second season had been announced to premiere some time in 2020, but in August 2020 Netflix reversed their decision and cancelled the show due to concerns about the cost of filming during the COVID-19 pandemic.

This has nothing to do with the Body Horror 80s cult film Society.

The Society contains examples of: