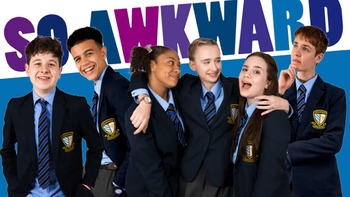 So Awkward is a sitcom series on CBBC. It stars Cleo Demetriou as Lily Hampton, Ameerah Falzon-Ojo as Jas (Jasmine) Salford, Sophia Dall'aglio as Martha Fitzgerald and Archie Lyndhurst as Ollie Coulton.

The show follows the lives of the three socially awkward friends—Lily, Jas and Martha—as they go through school. It starts with them as 13 year olds and follows them through their high school career: trying to fit in at school and deal with day-to-day life at school, boys and parental dramas.