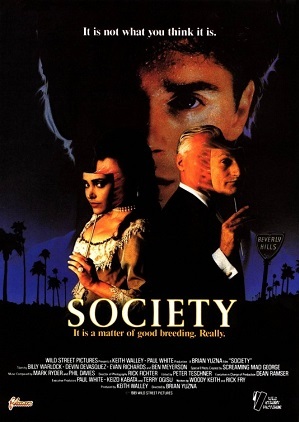 Society is a 1989 Body Horror-comedy film and the directorial debut of Re-Animator producer Brian Yuzna.

Bill Whitney is a popular teenager living in Beverly Hills, the only son of a wealthy upper class family. Despite his privileged position, he feels out of place in his family and life. Several strange circumstances lead him to suspect that his family and friends may not be what they seem, as Bill uncovers a conspiracy among the higher members of society.

A sequel comic, Society: Party Animal, was released in 2003.

Has nothing to do with the 2019 Netflix fantasy teen drama The Society.

In conclusion: The Aristocrats!