Film / Sorry to Bother You 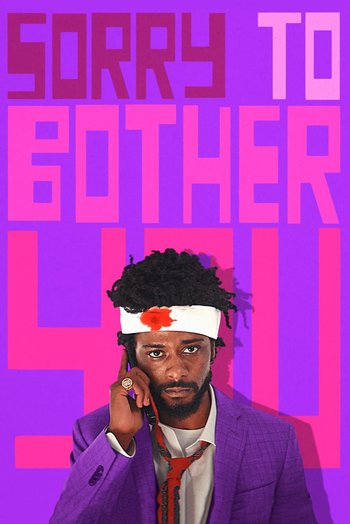 Stick to the script.
Detroit: This is morally emaciating. I can't ride with you.
Cash: I’m doing this and I’m really good at it.
Advertisement:

Cassius "Cash" Green (Stanfield) is a down-on-his-luck Oaklander who wins a job as a telemarketer at a company called RegalView. He doesn't do very well in the position until an older coworker (Danny Glover) tells him he can earn a higher commission from clients by using his "White voice" (provided by David Cross) while on the phone with them.

When Cash starts to follow that strategy, his career at RegalView takes off in a big way, and he's promoted to the position of "Power Caller" by Mr. _______ (Hardwick), an elusive senior member of the company who's also a Black man using a "White voice" (provided by Patton Oswalt). Despite Cash's lofty new status, it puts a strain on his relationships with his girlfriend Detroit (Thompson) and their friends and fellow co-workers (Fowler and Yeun).

Riley based the film's story on his own experiences working in telemarketing and needing to use a different voice to find success. He finished the screenplay in 2012, but as he had no means of producing it at the time, he opted to turn it into the basis of an album of the same name with his band The Coup. The screenplay would later be published in full in 2014.

Sorry to Bother You provides examples of: