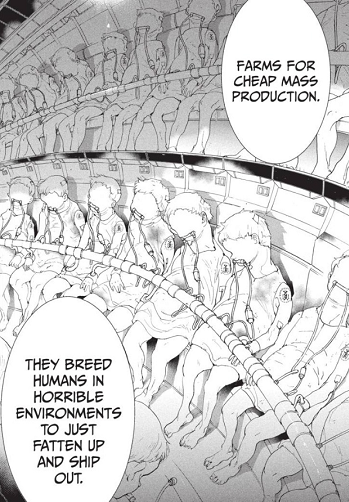 "The machines had found all the energy they would ever need. There are fields, Neo...endless fields, where human beings are no longer 'born': we are grown."
— Morpheus, The Matrix
Advertisement:

Want to show that the bad guys (or possibly the Alien Invasion) are really, truly evil? Want them to cross the Moral Event Horizon without having to do much work? Want them to just terrify everybody into oblivion? Easy! Just state — or really heavily imply — that they breed humans like livestock, or keep them like animals in vast People Farms. Their purpose needn't be specified. Eating us? Harvesting our souls? Being bred for our skills in magic? Human Resources? Because they like to watch or more sinister reasons? Doesn't matter. Just the implication is enough to squick people.

While it's true that humans are just another species of animal on this Insignificant Little Blue Planet, we tend to think ourselves above mere animals — among other things, we believe that all of us have an inherent right to freedom, safety from imprisonment without due cause, or abuse both physical and emotional. People Farms play to lots of Primal Fears and Squicks at once — fear of imprisonment, enslavement, death (if we get treated to a culling of unfit stock), rape (if there's a "breeding program" going on, which participants have no choice in), mutilation (branding/tattooing/tagging with a number or Mark of Shame, neutering on occasion, and so on) and the general sense of being controlled. If it's our fellow humans doing this, you can be certain that their contempt for their fellow men is absolute. If it's an alien race, you know they obviously didn't get the memo that Humans Are Special. Of course, other sapient species can be substituted for humans, provided that they're sympathetic.

In reality, though, humans do not make a good farming animal for anything, even if you somehow manage to keep them from trying to escape or fight back every now and then. Humans are slow to mature and reproduce, while economically an animal that requires over 3 years of growing is largely inefficient. We cannot convert inedible biomass such as grass, as human body needs a complex diet to develop properly. A huge part of our energy is wasted on the brain, and it cannot be just shut down and prevented from growing. Unless humans are literally the only available source of a given product, it makes no sense whatsoever; and the price of any human cultivated product would be obscene for any mass production.

What really is scary about the idea of wide-scale human imprisonment and abuse puts people in mind of historical setups resembling this trope, including The Holocaust, The Gulag, and many other infamous instances of slavery, hellhole prisons, and Final Solutions, where—except in some instances of chattel slavery—the goal was not to farm people but to punish or exterminate them.

A major example of Industrialized Evil.