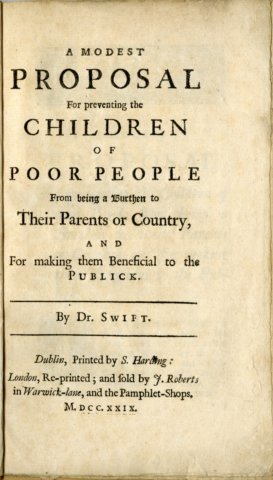 A Modest Proposal (full title: A Modest Proposal For Preventing The Children of Poor People in Ireland From Being a Burden to Their Parents or Country, and For Making Them Beneficial to The Publick) was written in 1729 by Irish satirist Jonathan Swift. It starts off like a modern essay detailing the hardships of the Irish people who are living in poverty and how the current means of fixing the problem are inadequate. Then Swift presents his own idea, ostensibly relayed from an "American friend":
"A young healthy child well nursed, is, at a year old, a most delicious nourishing and wholesome food, whether stewed, roasted, baked, or boiled; and I make no doubt that it will equally serve in a fricassee, or a ragout."
Advertisement:

Many people found Swift's little joke about how the poor could sell their children to the rich for food to be in poor taste. Others were shocked and appalled. Some thought it should be seriously considered. Those two didn't get the joke.

The original can be found here

A Modest Proposal provides examples of: