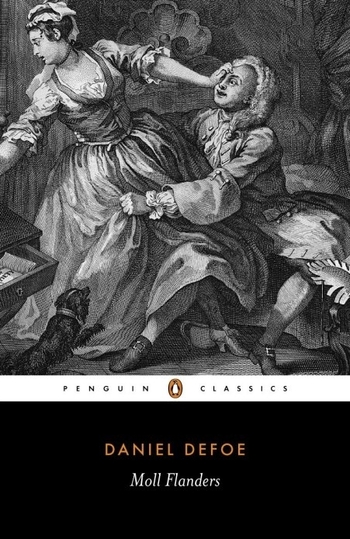 Well, we don't really need to, given that the entire story is revealed by the full title (*takes a breath*): The Fortunes and Misfortunes of the Famous Moll Flanders, Etc. Who Was Born In Newgate, and During a Life of Continu'd Variety For Threescore Years, Besides Her Childhood, Was Twelve Year a Whore, Five Times a Wife [Whereof Once To Her Own Brother], Twelve Year a Thief, Eight Year a Transported Felon In Virginia, At Last Grew Rich, Liv'd Honest, and Died a Penitent. Written from her own Memorandums. (*breathes*) Whew.

Outside that, all you really need to know is that it's a novel published in 1722 written by Daniel Defoe, author of Robinson Crusoe, and that it received several adaptations, including a 1965 film starring Kim Novak as Moll, a 1996 film starring Robin Wright as Moll, and a TV miniseries also from 1996, starring Alex Kingston as Moll.