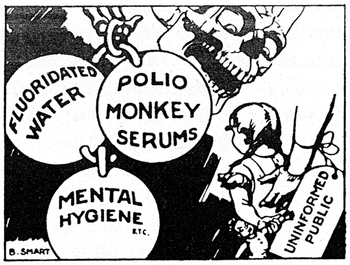 ◊ declaring the polio vaccine, water treatment, and psychiatry to be plots to destroy America a real pamphlet, or a parody of fervent 1950s "Red scare" tactics?Answer It's real.
"Satire doesn't stand a chance against reality anymore."
— Jules Feiffer in 1959
Advertisement:

RationalWiki, Poe's Law was formulated by Nathan Poe, referring to the Flame Wars on Christian forums where Creationism vs. Evolution was discussed: Many users posted parody comments, which were followed by both angry and supportive replies. Poe phrased his law thus: "Without a winking smiley or other blatant display of humor, it is utterly impossible to parody a Creationist in such a way that someone won't mistake it for the genuine article." As far as we know, nothing to do with Edgar Allan Poe.

While Poe's Law referred originally to religious fundamentalists, it can also equally apply to austere atheism, steely socialism or communism, crazy capitalism, extreme environmentalism, fanatic feminism, crackers correctness, or indeed, absolutely any other debate where controversy runs high and at least one position is particularly extreme, such as the infamous North Korean Twitter feed that got mistaken for the real thing.