Music / Thick as a Brick 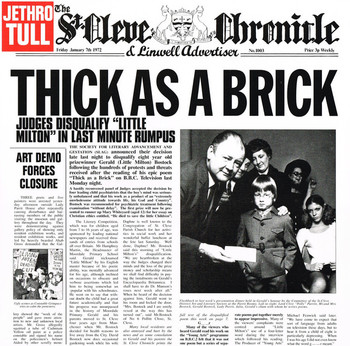 And your wise men don't know how it feels
Thick as a Brick is the fifth studio album by Progressive Rock band Jethro Tull, released in 1972. Surprised that critics called Aqualung a concept album, bandleader Ian Anderson sought out to create "the mother of all concept albums" with Thick as a Brick. The album is supposedly an adaptation of an epic poem by a child prodigy named Gerald Bostock, who was disqualified from a poetry competition due to the offensive nature of the poem; in reality, all of the lyrics were written by Ian Anderson. Original copies were packaged with a parody newspaper giving more detail to the concept.

Thick As A Brick contains examples of: