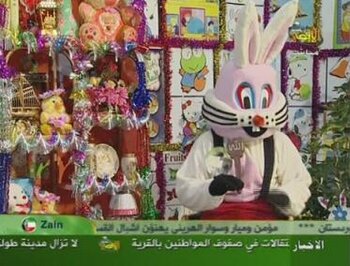 Tomorrow's Pioneers (also known as The Pioneers of Tomorrow) is a Palestinian kids show made by the Hamas-owned television station Al-Aqsa TV. The show follows a standard kids show format with Saraa Barhoum as the host and a costumed animal as her co-host as they discussed life in Palestine in talk-show format and performed some skits. It was broadcast between 2007 and 2009.

The show is incredibly controversial due to the many ideas it promotes: from antisemitism, to anti-Americanism, to a rather strict form of Islam. While some of this controversy has come from what appears to be biased mistranslation by pro-Israel groups, much of the show really is that extreme. It's also launched controversy among Palestinians and pro-Palestinian groups, with the Palestinian Authority's Ministry of Information having pulled it off the air before the PA lost control over Gaza (where Hamas is based), and many supporters of the Palestinian cause telling Hamas to stop producing such hateful and counterproductive garbage. It's also notorious for the various rip-offs of American cartoon characters like Mickey Mouse.

And before we go on... No, this isn't Creepypasta. Some people really will go this far (and moreso) to make their point.