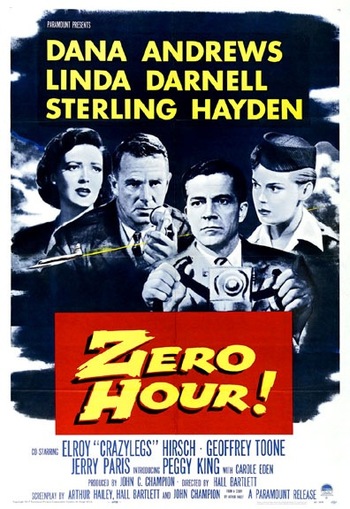 Dr. Baird: Can you fly this airplane, and land it?
Ted Stryker: No. Not a chance!
Advertisement:

Zero Hour! is a 1957 Suspense / Disaster Movie directed by Hall Bartlett, starring Dana Andrews, Linda Darnell and Sterling Hayden. One of the earliest examples of the "airline disaster" sub-genre, the film was adapted from the Canadian teleplay Flight Into Danger, written by former pilot Arthur Hailey, and from his novelization of same.

Royal Canadian Air Force Pilot Ted Stryker (Andrews) leads an ill-fated air raid through heavy fog during the waning years of World War II, a mission which results in the near total loss of his entire squadron. Wracked with guilt, he spends the next eleven years drifting from job to job, unable to accept any position of responsibility, which eventually drives his wife Ellen (Darnell) to take their son Joey and leave him; but Stryker manages to board their cross-Canada flight just before takeoff. Meanwhile, a last-minute catering reschedule results in half the passengers getting violently ill — and both pilots as well. Turns out Stryker is the only person on board who can possibly pilot the embattled flight and save everyone, but only if he can conquer his own demons and work with his gruff former superior officer, Captain Martin Treleaven (Hayden), who communicates with Stryker from the airport via radio and tries to talk him through the process of flying the plane and safely landing it.

If any of this sounds familiar to modern audiences, it's likely because the plot of Zero Hour! was adapted, officially and nearly wholesale (including character names, back stories and even entire hunks of dialog), into the 1980 parody film Airplane!. In this film the Love Interest played by Darnell is Stryker's wife, and a passenger rather than a stewardess, and little Joey is their son. Other than that, Zero Hour! is basically Airplane! with all the jokes taken out.

Arthur Hailey, writer of the original story, later wrote another plane-in-distress story, Airport, which was made into a 1970 film that started the decade's Disaster Movie craze... which Airplane! spoofed so effectively that it ended the genre, making Hailey technically both the creator and destroyer of it.

No relation to the 1994 DC Comics Crisis Crossover of the same name.