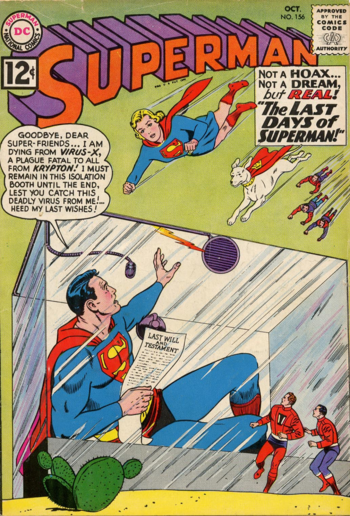 One of the best ways to assure that people pay attention is to endanger a character they love. Sometimes, writers need to be able to put characters in a situation that could potentially result in the apparently impending death of multiple characters, but where they can be in a relatively peaceful environment and where death will take a while to befall them. This allows time for Angst and Character Development.

Enter the Contamination Situation, in which a main character is exposed to or infected with something very bad, usually potentially fatal and the exposure/infection is a main focus of the episode. In television, unless a character experiences a near-death revelation that completely changes them or dies, these episodes are typically not Wham Episodes, but are still usually a big deal. In most cases, we're talking about November/ May sweeps episodes, not season finales.

The infection usually advances Character Development by causing the character to rethink their life. If one of the characters caught up in the ordeal is part of a Will They or Won't They? storyline, you can expect that relationship to take a front seat when this happens. This can result in a Love Epiphany. Other characters may also have poignant conversations about the fragility of life. This can occur if a character deliberately makes themselves sick.

In television, this is most prevelant on crime and medical dramas, not surprisingly. The exposure/infection usually, but not always, happens to a leading character as opposed to a supporting character. If it is a supporting character, it will probably be Everyone's Baby Sister. The goal is for the audience to be emotionally invested, so more often than not, the infected character is a fan favorite.

There are also countless films based on this premise.

All Spoilers will be unmarked ahead. Beware.