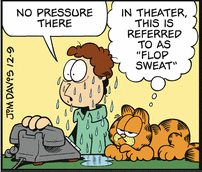 Commonly referred to as "Flop sweat", this is when a character will break out into an excessive sweat when either nervous or scared. Another term for it is "sweating bullets". Can be associated with a character who is a Nervous Wreck or a Butt-Monkey. May sometimes be accompanied with a Loud Gulp, or as part of an Oh, Crap! moment.

Truth in Television, especially for people with anxiety disorders.

Nate has a bad time.

Nate has a bad time.