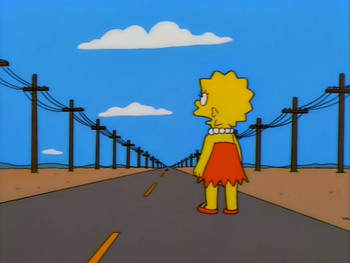 "I should have got off at Crackton..."

When Marge has to back out of taking Lisa to an ancient Egyptian exhibit at the museum so she can take Bart to Dr. Hibbert's office, Lisa tricks Homer into letting her ride the bus, but she boards the wrong one and must find her way home through a series of unfamiliar neighborhoods.