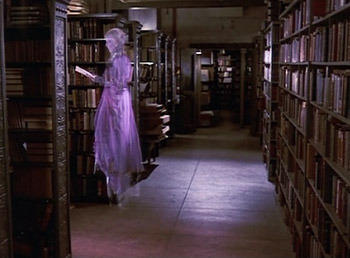 Seriously, we are not kidding here: "Shh."

Libraries creep some people out all on their own. So an eerily desolate and truly completely silent one is a very effective setting if you want to make the situation even creepier. The library could be lacking in patrons for any reason — it could be abandoned or merely after closing hours.

It could be shabby and full of crumbling books, or it could be in good order just without anyone there. This tends to be more effective with older styled buildings than with ultra modern libraries.

May be a Magical Library.