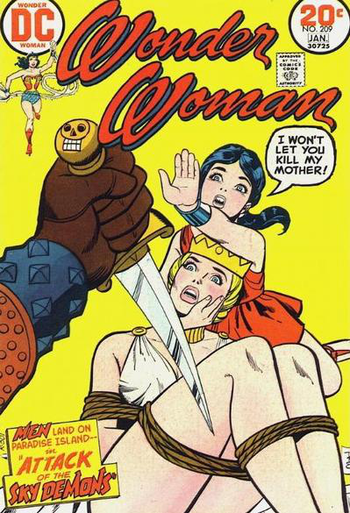 Kids have this tendency to get themselves in trouble, often requiring their parental figures to bail them out. Sometimes this goes to the point of violence or physical feats, where Mama Bear and Papa Wolf step up to the plate.

On the other hand, sometimes it's the parents that get themselves in a sticky situation. Then the children will go to any lengths necessary to save their parents (or teacher, older sibling, etc.) from danger. If the characters are just normally protective of their parents, it's Extremely Protective Child.

Any series with a Kid Hero who isn't Conveniently an Orphan is bound to try this. Compare Adults Are Useless and contrast Mama Bear and Papa Wolf. This trope is often a non-Ho Yay version of The Not-Love Interest.