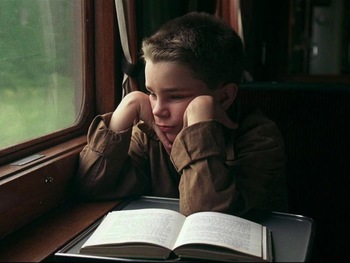 "The greatest movie ever, as anybody with half a brain knows, is My Life as a Dog."
— Kurt Vonnegut
Advertisement:

My Life as a Dog (Swedish: Mitt liv som hund) is a 1985 Swedish film directed by Lasse Hallström and adapted from the novel of the same name by Reidar Jönsson, is a very heart-wrenching and symbolic story about a boy named Ingemar (Anton Glanzelius) who is sent to live with relatives in the countryside when his mother falls ill.

The story, which takes place in The '50s, starts out with Ingemar, a boy living in the Stockholm area with his mother and older brother. Ingemar is a handful, constantly getting into trouble and driving his mom nuts with his beloved dog, Sickan. Ingemar does not realize his mother is terminally ill. When he and his brother become too much to handle, the boys are split up and sent to live with different relatives. Ingemar is sent to live with his Uncle Gunnar in Småland. Ingemar pleads to bring his dog with him, but he is not allowed to and is told his dog will be placed in a kennel.

Ingemar has to adapt to living in a strange land with strange people. Mostly what makes them strange is how rural they are when he's used to the city. Also, several of them are eccentric like a boy with natural green hair and an artist that makes giant sculptures of naked women.

The name of the movie comes from the boy comparing himself to Laika, the first dog sent into space. The boy constantly talks about how they left the dog up there to die. Near the end of the film, the boy has a nervous breakdown thinking that he's Laika. He barks like a dog and locks himself in the guest house that he imagines to be his space shuttle. His uncle is hard pressed to figure out how to get the boy to leave his space shuttle.

In 1996, it was adapted into a television series which aired on Showtime in the United States. In the TV version, the setting was changed to contemporary Canada.

My Life as a Dog contains examples of:

Ingemar is hiding out with his dog, Sickan, at a trash heap. He builds a fire to keep the both of them warm, but doesnât plan for how to put it out.

Example of:
Ignorant About Fire

Ingemar is hiding out with his dog, Sickan, at a trash heap. He builds a fire to keep the both of them warm, but doesnât plan for how to put it out.