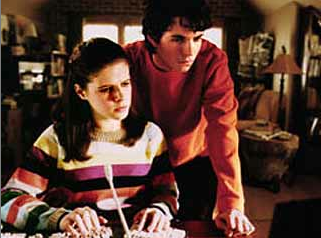 It's real in there.
Are you in there, Dad?... Because if you are, we're never gonna stop looking until we find you.
—Cleo Bellows, "Red Wolf's Daughter"
Advertisement:

MythQuest was a Canadian series that first aired on PBS and CBC in 2001, with the goal of teaching children and teens about the mythology of cultures throughout the world. It lasted for thirteen episodes before being prematurely cancelled.

Archeologist Matt Bellows is scanning artifacts into the Cyber Museum when he finds an object he calls the Gorgos stone. When he scans it in, the trickster god Gorgos is released into the system. That same night, Matt disappears without a trace...

Soon after his disappearance, his children, Cleo and Alex Bellows open up the Cyber Museum to find that it has undergone an unexpected upgrade. When one of them touches an artifact on the screen, they are instantly transported into a myth, taking the place of one of the heroes as the other sibling watches from the real world. They must now travel through the myths to find their father, all while avoiding the trickery of Gorgos.

The show was never released on DVD, but it is available on Netflix in some regions. The first three episodes, as well as the fifth, recieved novelizations by the writers of the episodes. They contain scene extensions and a more canonical account of the myths that the episodes were based on. They are available on Amazon.