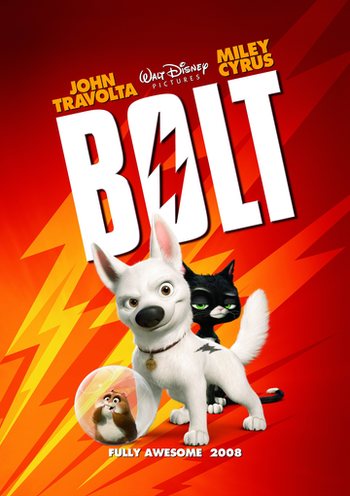 A hero is unleashed!note From left to right: Rhino, Bolt, and Mittens.
Mittens: How do you say 'there's no way I'm doing this' in Crazy?
Rhino: Let it begin! LET IT BEGIN!
Advertisement:

Released in 2008, Bolt is the 48th film in the Disney Animated Canon and the first film of the canon to be entirely supervised by John Lasseter.

Bolt is a genetically altered dog with numerous superpowers. Alongside his "person," Penny, he fights the evil forces of Dr. Calico, a Mad Scientist who has kidnapped Penny's father...

In truth, Bolt has spent most of his life on a Hollywood set, believing that his powers and adventures are real, while the crew carefully hides anything that might reveal the "Truman Show" Plot to the canine star. When a network executive demands the show become more interesting to a key advertising demographic, the crew chooses a cliffhanger plot where Penny is captured by Dr. Calico — causing Bolt to escape from his trailer to try and rescue her for real (and is accidentally shipped to New York in the process). With the help of an alley cat named Mittens and an easily-excitable hamster named Rhino, he makes his way back to Hollywood and Penny, realizing along the way that his powers aren't real as well as learning what it means to be a normal dog.

The film went through several years of Troubled Production, beginning life with the title of American Dog and featuring a very different plot that still centered around a television dog that believed himself to be inside the show. Originally directed by Chris Sanders, friction after Pixar's integration into Walt Disney Animation led to Sanders being replaced and the film undergoing a significant overhaul into Bolt. The dust up led to Sanders departing Disney altogether, leading to his creation of How to Train Your Dragon for rival DreamWorks Animation.

open/close all folders
A-M
N-Z
♫ There is no home like the one you've got
'Cause that home belongs to you! ♫