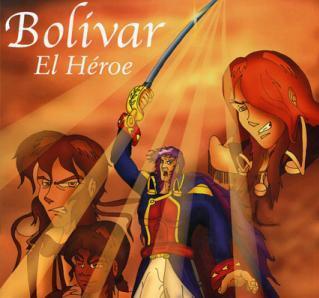 This movie is the story of a hero, seen through the eyes of a child. It's based on the life of Simón Bolívar and contains fictional events and characters.
Opening Narration

Bolívar, el Héroe is a Colombian animated film based on the life of the Rebel Leader Simón Bolívar. It was released on 2003, and directed by Guillermo Rincón and animated by Fusionarte.
Advertisement:

The film is about Simón Bolívar's life from his birth to the Battle of Boyacá, in which the campaign for the independence of New Granada was developed. Guillermo Rincón, the director, said that after seeing many heroes exhalted in American films, he wanted to exalt one closer to Colombia who deserves it.

For a time, many people on forums assured that the movie didn't officially exist due to a rumor stating that both its producers and the Mexican company dubbing it decided to erase it from existence due to its godawful quality (the movie was actually released theatrically in Colombia for a few weeks and Señal Colombia broadcasted it occasionally, disproving the rumor). It wasn't until years later that the entire movie was leaked on the internet with the second, Mexican dub for the entire world to see.

This film has these tropes: