Film / Embrace of the Serpent 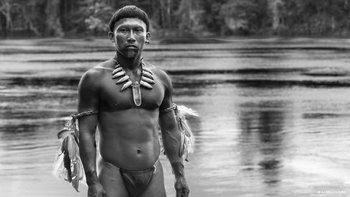 Embrace of the Serpent is a 2015 film from Colombia, directed by Ciro Guerra.

It tells two different narratives, intertwined throughout the film. In 1909 Karamakate, a tribesman of the Cohiuano people living alone deep in the heart of the Colombian Amazon, meets two newcomers. Theo, a German botanist and explorer who has been studying the wildlife of the Amazon, is desperately ill with malaria. Theo, along with his loyal tribesman assistant Manduca, search for the yakruna, a mysterious plant said to have healing powers which may be able to save Theo's life.

Decades later—the time setting is vague but Word of God specifies 1940—a much older Karamakate meets another white man. An American named Evan comes up the Amazon bearing Theo's journals, which were taken out of the jungle by Manduca, Theo having died in the Amazon back in 1909. Evan asks Karamakate to help him find the yakruna plant—but he has an ulterior motive.

The common theme of both stories is the devastation wrought on the cultures of the Amazonian rain forest by Western imperialists. The savagery of rubber cultivation also inspired the novel Heart of Darkness, and indirectly its film adaptation Apocalypse Now, which bears thematic similarities to this film.