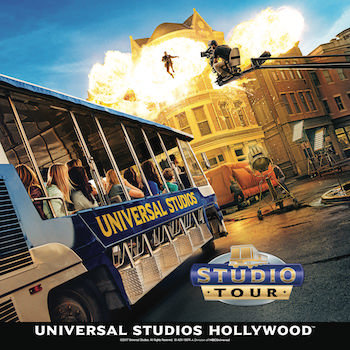 The tour's origins goes all the way back to 1915, just three years after the founding of Universal Pictures. The "tour" at this time cost just 25 cents, and allowed the public to explore the Universal City studio lot and watch films being shot up-close. This version of the tour was successful, but closed down in 1930 when the Rise of the Talkies suddenly meant that rowdy crowds of spectators were no longer welcome on film sets. The tram tour as we mostly know it today was introduced in 1964 under the name "GlamorTrams". Since then, the tour has constantly evolved with both the times and changes the backlot has undergone over the years.

Due to the sheer size of Universal's backlot, the tour consists of many sections, varying between the studio's sets and props and numerous detours through sequences dedicated to the studio's films. The tour is hosted by both a live host and by a celebrity via video footage. Celebrities that have hosted the ride include Whoopi Goldberg and currently Jimmy Fallon.

Tropes that appear in the Studio Tour include: