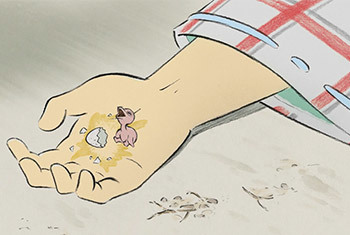 "Ain't it dazzling? The light of a new life... and the fading of yours. It's like a painting."
— Capone "Gang" Bege, One Piece
Advertisement:

Within an episode (or a chapter or a scene), someone is born or a pregnancy is revealed and someone else dies, emphasizing the cycle of life. A supertrope of Death by Childbirth, but includes all the cases where the death is not the mother, as well as those where it is. The Phoenix is a symbol of the motif. Also a form of Ironic Juxtaposition.

Compare Babies Ever After, Dead Guy Junior, Someone to Remember Him By, Coming and Going (where someone might be conceived), and Life/Death Juxtaposition (where the general concept of "life" is juxtaposed with that of "death").

As a Death Trope, ALL SPOILERS will be unmarked ahead. Beware.