Literature / The Day Thou Gavest 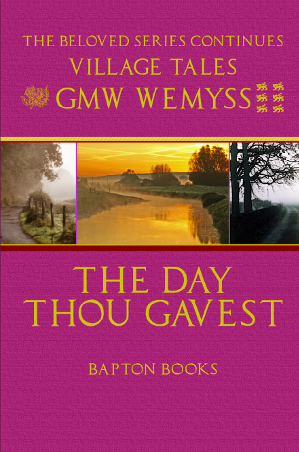 It's morning – not in America: in Wildest Wiltshire. Cider for breakfast, anyone?
Advertisement:

Thoroughly British Slice of Life novel published in 2016 by GMW Wemyss: the third in the Village Tales series, following on from 2013's Cross And Poppy and early 2016's Evensong.

Being Exactly What It Says on the Tin, it chronicles the events: brewing, baking, the operating of railway trains, farming, archaeology, the fire brigade, worship, death, policing, birth, quarrels, reconciliations, and all: from midnight to midnight on a January 2016 Friday, in the Woolfonts and District and in the adjoining Downland parishes, with a few brief excursions to check in on the Taunton Estates Office in London, how Rupert and Jamie are getting on at Oxford, and how the ancient Lord Mallerstang is faring.

The tropes common to the series are being listed on that page. Additionally, The Day Thou Gavest provides especially notable or specific examples of: