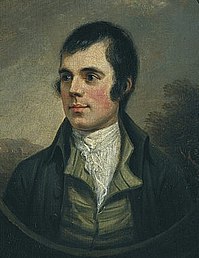 Even if you haven't heard of him, you've heard some of his stuff; he's one of those guys whose works have dissolved into collective memory. Unofficial New Year's Eve song "Auld Lang Syne" is hisnote well, sort of — he claimed it was a pre-existing folk song that he just wrote down and tidied up. He also wrote "To A Mouse", a line of which was pressed into service for John Steinbeck's novel Of Mice and Men. Another of his poems, "To A Louse", gave us the proverb

O wad some Pow'r the giftie gie us
To see ourselves as others see us!
Also, he wrote Comin' Thro the Rye, or at least one version thereof, which was mentioned in The Catcher in the Rye and provided its title... in a way.

Burns was a member of the Romantics, and was specifically a Romantic nationalist, who helped craft the global view of Scotland. In addition to these grand tragic poems of Highland life, he also wrote on things that mattered to him personally. Such as farming, and the state of his wife's pubic hair.