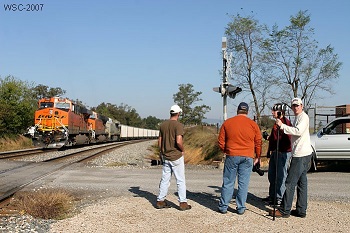 Some American Rail Enthusiasts in their natural habitat
"I like trains."
— "I Like Trains" Kid, asdfmovie
Advertisement:

Someone obsessed with trains and railways, whether it's toy models or watching/riding actual trains. This is especially common in British and Japanese fictional works, which makes sense since both nations in real life have a high population of such enthusiasts. The United States and Germany have a lot of such enthusiasts as well, as do most other European nations, but generally with fewer depictions in popular media.

In Britain, the most popular depiction is the trainspotter, whose railway obsession revolves around hunting down each and every locomotive—and, sometimes, other rail equipment—and marking down each one they've seen in a little book listing all such equipment existing. In the field, they may use a paper notebook instead of their master stock book, and modern technology means they may now make their notes using a voice recorder and keep their master list as a computer database. Being a trainspotter involves lots of standing around in the cold and wet on station platforms waiting for that elusive quarry; this made the waterproof coats that they generally wear, the "anorak", become a symbol of the trainspotter. The word "anorak" itself has become a generic term, in fact, used to refer to the obsessively geeky in other fields as well. Trainspotters are generally depicted with most of the nerd/geek stereotypes—thick glasses, bad hair, no fashion sense, and frequently physically unattractive and socially awkward.

The second common British stereotypical character is the older, more respectable railway enthusiast. This is a common pastime of The Vicar. Such an enthusiast is likely to be active in the railway historical and preservation movement, and may be actively involved in restoring or operating historical trains. They are also likely to have a model railway built with obsessive care, and may be a photographer as well.

In Japan, the most commonly depicted form is the densha otaku (not to be confused with Densha Otoko), also known as tetsuotanote after the "iron roads" trains travel on; tetsu is Japanese for "iron", a species of otaku whose obsession is trains. This stereotype has much in common with the English trainspotter, being extremely geeky and socially awkward, and obsessed with their chosen subject. The Japanese version is more likely than the English one to be a keen photographer of railway subjects, and many depictions involve a big camera and lens. Japanese rail photography often concentrates on trains' heads, by the way.

In the United States, most media depictions of the railfan (sometimes also called a "trainspotter" on the East Coast, or "ferroequinologist" for "one who studies iron horses") involve model railroads, which were generally treated as a common and respectable hobby. It's more rarely depicted in recent years. Most portrayed tend to be older, and although respectable, it tends to be treated as Serious Business for humor's sake. Traditional railfans—already derisively referred to by railroad workers as foamers, a term some have adopted self-deprecatingly—were massively hurt by post 9/11 changes where standing around bridges waiting to photograph trains was often mistakenly viewed as scouting locations for terrorist attacks. Fortunately, enough time has passed that that perception has died down.

Where British railfans use notebooks, German railfans prefer cameras, just like Japanese densha otaku. German rail photographs refer to themselves as Fotofuzzis or simply Fuzzisnote Being German, this is pronounced "footsie" rather than "fuzzy" and don't need anoraks either because they usually refuse to take photos when the sun isn't shining, even if it's a tiny little cloud blocking the sun the very second a train passes. Quality standards are high, and nitpicking on photographs is common in online communities whenever the standards of commercial photobooks aren't reached. For example, nothing is allowed to obstruct the view on the photographed vehicles, neither overhead catenary poles nor platforms nor signs nor vegetation (which Fuzzis sometimes cut down themselves). The common rules for vehicle portraits (45-60° angle from ahead, sun from behind and not too high, and so forth) have been used so often that some peope don't do portraits anymore because it's boring. Newer rolling stock and newer liveries are loathed by older railfans, especially those who have seen regular steam traffic in the West before 1977 and still put films in their semi-automatic SLRs, and preferred prey of younger railfans who hardly know anything older and go out with a compact camera or even their phone as their camera. While British railfans wait and see what comes, German railfans love to track down particular vehicles, especially locomotives with advertising on them, using sightings and leaked schedules and go ballistic when the expected material doesn't show up at the expected time.

Model railroading is quite popular in Germany, too, and Miniatur Wunderland in Hamburg, the world's largest model railroad,note As in, 15,715 metres (51,558 feet) of track in H0 scale, with still more yet to be built is just one of the signs. As is the sheer number of German brands in the model railroad industry. Passionate German model railroaders know just about everything about the rolling stock they're running, they know which locomotives have been used in which services, which livery and numbering belongs to which era, and how train consists are composed correctly; occasionally, they don't even shy away from lecturing those who either don't know or don't care and just want to enjoy their beautiful trains (which is the case on most public model railroads). They would soup up a €500 ($770) locomotive with etched brass parts because the manufacturer got tiny details wrong, because the handles are too thick, or whatever. The fact that the core of German model railroaders is aging is shown by the majority still refusing any locomotives, cars, liveries, or letterings introduced after 1968, sometimes even 1960.

The Other Wiki also has an article on this.

Not to be confused with Trainstopping or Irvine Welsh's novel and film Trainspotting.