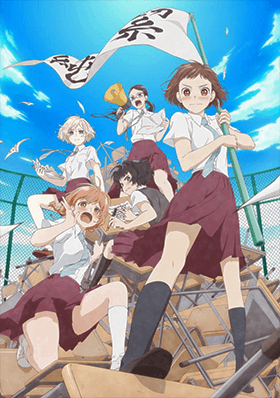 "Oh my god! This is just moe American Pie!
— Gigguk (stumbling onto a way to sum up the series for new watchers)
Advertisement:

At a literature club in high school, as a means of ending some tension, the club members are asked what was one thing they wanted to do before they died. One girl, Niina Sugawara, bluntly states that she wanted to experience sex. As such, this starts the girls' journey through the awkward stage of adulthood.

Known in Japan as Araburu Kisetsu no Otome Domo Yo, the manga was written by Mari Okada (of Toradora! and Anohana fame; she also scripted and helped direct the anime) and illustrated by Nao Emoto. It began serialization in Bessatsu Shōnen Magazine in December 2016. An anime adaptation began on July 5th, 2019 and was distributed by Lay-duce on the Animeism programming block. It is also available on Sentai Filmworks's HiDive streaming channel. Both the manga and the anime finished within two weeks of each other; the final volume (with a "Where Are They Now?" Epilogue) was published on October 9, 2019, just after the anime ended on September 24, 2019.