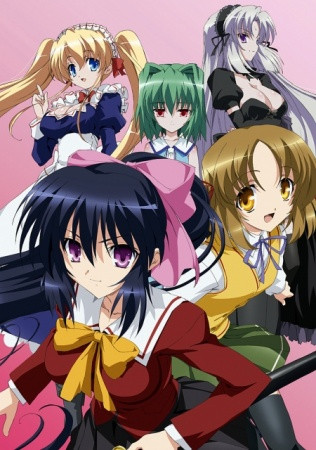 Seven years ago, Yuuto Amakawa's parents died, leaving him living alone without a single relative. Ever since then, his childhood friend, Rinko Kuzaki, has woken him up, cooked for him and generally taken care of him. The only thing he has from any relative is a mysterious charm, a red omamori, an amulet, given to him by his grandparents as a good luck charm.

A Light Novel adaptation was published in July 2008, and sold four volumes until January 2010. An anime adaption aired in January 2010, animated by Studio ZEXCS. And good news for English-speaking fans: the manga has been licensed by Yen Press for an official translation and has hit the shelves as of November 2010, with an Explicit Content rating. A four-panel comic adaptaton, called Omamori Himari: Himari's Panties, was serialized in Dragon Age from November 2009 to November 2010. Another side comic adaptation, called Omamori Himari: Book of the Gaiden, was released on September 9, 2011.

Crunchyroll has reacquired the rights to stream it online, and can be viewed here

I shall protect you, Young Tropes: