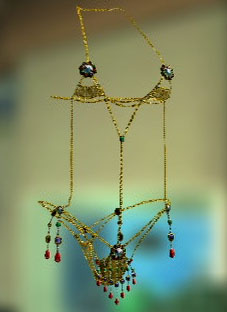 You can barely see anything now, but you'd see everything if she wore it.
"Are... are you certain this is clothing?"
— Agnès Oblige (on the Bravo Bikini), Bravely Default
Advertisement:

A swimsuit noted in-universe for its extreme brevity.

While Moral Guardians have been complaining about swimsuits showing too much skin as long as there have been swimsuits, this trope really took off after the introduction of the bikini.

To qualify, a swimsuit must be described or reacted to in terms of how small it is, or how much it shows. For example, if the text claims it's "two postage stamps and some dental floss", or onlookers are shown having their eyes bug out. Sometimes, it can subverted by the female character wearing less common designs such as a sling bikini which technically speaking has more material than a string bikini, but is actually much more revealing on the person when actually worn using the Theiss Titillation Theory.

The swimsuit does not actually need to be worn for this trope — displaying it to someone who sarcastically quips, "Where's the rest of it" or (if it's a family sitcom) declares "No daughter of mine is wearing that!" qualifies.

Note that this trope is not any swimsuit which the audience thinks is unusually small; it must be reacted to as such within the story.

A likely candidate to become a Slippery Swimsuit. Compare Thong of Shielding. Contrast with the Old-Timey Bathing Suit or the School Swimsuit.

Warning: Most of the image links below are Not Safe for Work.