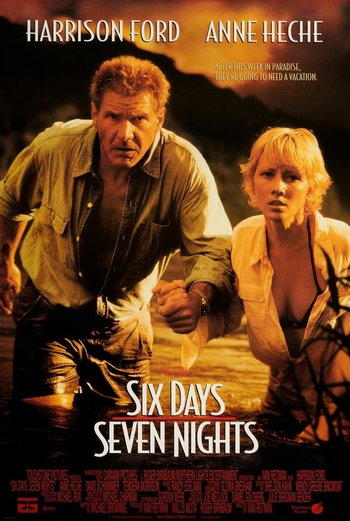 The film starts with a young couple Robin Monroe (Heche) and Frank Martin (Schwimmer). Robin is a workaholic journalist for "Dazzle", a New York-based fashion magazine. Frank wants to get her away from work, arranging for a weeklong vacation in Makatea, in the Tuamotu Archipelago of the South Pacific. (Actual location.)

Their trip is uneventful, until they hire the DHC-2 Beaver airplane flown by Quinn Harris (Ford). The trio are joined by Angelica (Obradors), Harris' friend and lover. Her employers notify Robin that she has to attend a fashion event in Tahiti. She hires Harris to take her there, leaving Frank and Angelica waiting for them in Makatea.

When the aging Beaver crash-lands on a deserted island, Robin and Quinn have to survive on their own. Later encountering modern-day pirates and having to escape them as well. During all the action, the duo start falling for each other. Meanwhile, back in Makatea, Frank and Angelica are romancing each other.

The film was a box office hit but a critical failure at the time of its release. Nevertheless, its worldwide grosses of $164,839,294 probably ensure that it's fondly remembered by its various creators.

Not to be confused with the 2017 political thriller 6 Days.