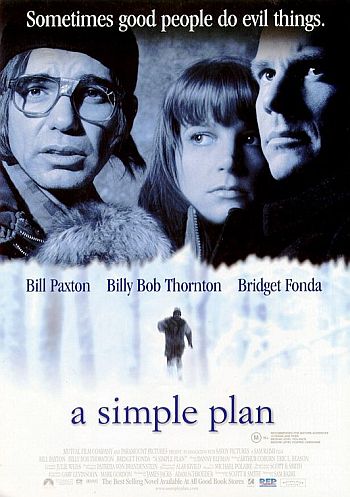 A Simple Plan is a 1998 Neo-Noir thriller film directed by Sam Raimi, starring Bill Paxton, Billy Bob Thornton, and Bridget Fonda. It is based on the novel of the same name by Scott Smith, who also wrote the screenplay.

Hank Mitchell (Paxton) and his pregnant wife, Sarah (Fonda), live in rural Minnesota. Hank, one of the town's few college graduates, works in a feed mill, while his wife is a librarian. Hank's brother, Jacob (Thornton), is a dim-witted but good-hearted fellow. The story begins with Hank, Jacob, and Jacob's friend, Lou (Briscoe), chasing a fox into the woods, where they find a crashed airplane. The pilot is dead and the only cargo is a bag full of money totaling $4.4 million. The three decide to take the money and hide it for six months, enough time to see if anyone is looking for it. Of course, this simple plan unravels over that time, and everyone comes to regret ever finding the money.