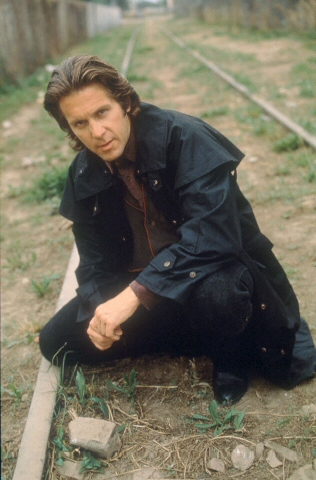 That's Buck spelled with a "B."
"I don't actually give; I deal. Are you ready to make a deal?"
— Sheriff Lucas Buck
Advertisement:

Welcome to Trinity, South Carolina. A quaint, lovely town of picturesque houses, white picket fences, old-growth forest, and friendly next-door neighbors. Good people. There's only one slight problem with this beautiful idyllic town where everyone knows everybody (and their juiciest secrets for the gossip chain):

Its premier lawman, Sheriff Lucas Buck, is the Devil.

American Gothic was a horror television series, which lasted for one season, from September 1995 to July 1996. A unique, outstanding series never given a chance by its network (CBS, in this case), American Gothic was also one of the most chilling and disturbing series ever to air, a stark morality tale with Gary Cole as the Devil incarnate (or a close kin). Sheriff Buck rules over his little kingdom with morbid humor and playfulness, setting up moral pitfalls and dilemmas for the town's residents, and dispensing his own brand of justice, vengeance, or just plain meanness—which often involves ruin, insanity, dismemberment, or death.

Opposing Buck is young Caleb Temple (Lucas Black), an orphan who talks regularly to his dead sister Merlyn (Sarah Paulson) and has powers of his own—and who may or may not be Buck's son. Buck wants Caleb to follow him; Merlyn wants Caleb to resist; and the rest of Trinity gets caught in the crossfire, so to speak. Other members of the main cast include Buck's arch-enemy, the kindly Dr. Matt Crower (Jake Weber), Caleb's cousin Intrepid Reporter Gail Emory (Paige Turco), Femme Fatale Selena Coombs (Brenda Bakke), Buck's innefectual deputy Ben Healy (Nick Searcy), and Crower's eventual replacement Billy Peele (John Mese).

Unsurprisingly, the show is darkly Gothic and twisted, displaying many horror, suspense, and mystery tropes, although there is a delicious amount of Black Comedy as well.

Not to be confused with American Gothic (2016), which shares the same title but is otherwise quite dissimilar.