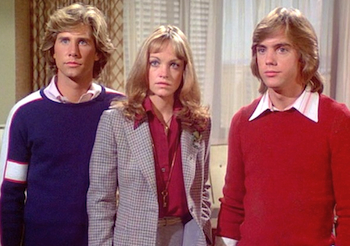 How do we do it? How do we keep getting ourselves in these situations?note From left to right: Frank Hardy (Parker Stevenson), Nancy Drew (Pamela Sue Martin), Joe Hardy (Shaun Cassidy)
"It's a dirty job, but someone has to do it."
— Joe Hardy
Advertisement:

Based on the two famous juvenile book series, The Hardy Boys and Nancy Drew, this 1977–79 mystery show on ABC starred Parker Stevenson and Shaun Cassidy as the amateur detective brothers Frank and Joe Hardy, and Pamela Sue Martin (and later Janet Louise Johnson) as the intrepid girl detective Nancy Drew. Lasting three seasons, it is far and away the most successful filmed adaptation of any of the Stratemeyer Syndicate's properties.

The Hardy Boys are brother amateur detectives, Frank (Parker Stevenson) and Joe (Shaun Cassidy). The two boys live in the fictional city of Bayport, Massachusetts (not New York, as in the books) with their famous father, Fenton Hardy (Ed Gilbert), a private detective who'd spent 20 years with the New York Police Department and who seemingly has connections everywhere. The brothers can't seem to go anywhere without having a mystery drop into their laps; even driving down a road heading for home means they'll get stopped by a young woman running away from an angry mob. In the third season, the focus of the series moved exclusively to them as they become professional police detectives for the Justice Department.