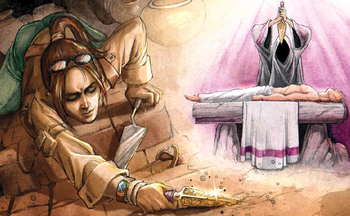 Cere Junda: You touch an object and witness events connected to it. You feel its history.
Cal Kestis: It's an... echo in the Force from the object.
— Star Wars Jedi: Fallen Order
Advertisement:

Psychometry is a Psychic Power whereby a character receives visions upon physical contact, sometimes involuntarily. The most common form is when the person touches an object and receives information about things or people the object has associated with and/or the environment around the object. It can also manifest as touching a person and getting visions or knowledge of their history, memories, or character.

Sister Trope to Touch Telepathy (active mental communication through touch), often overlaps with it. Compare Dreaming of Times Gone By, which can convey similar information but is done through dreams rather than a psychic event.