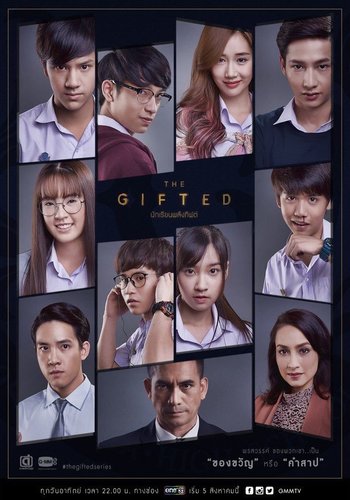 — The Gifted Class XV, poster —
"Ever wondered why the school is so eager to have talented students but never cares how they're doing? Let me tell you a story of a school called Ritdha Wittayakom and a program called The Gifted."
— Pang, Episode 1 intro
Advertisement:

The Gifted (นักเรียนพลังกิฟต์) is a Thai TV series produced by GMMTV and Parbdee. Its story is based on Sand Dhammarong Sermrittirong's 2015 thesis short film of the same name which he also adapted into a novel. The series aired on One31 and LineTV from 5 August 2018 to 4 November 2018. All 13 episodes are available on GMMTV official YouTube channel

. Its sequel, The Gifted: Graduation, premiered on 6 September 2020.

The story follows Pang, a lowest class student stuck within the strict hierarchical system of Ritdha High School, who is suddenly accelerated to the elite Gifted Program after passing the school's unconventional Placement Exam. The secretive program is a special class where students are trained to awaken and control their supernatural abilities. In parallel with the development of their new powers, Pang and his classmates begin investigating school's mysterious past while a conspiracy unravels.

This page may contain unmarked spoilers!

For more tropes check out the characters page