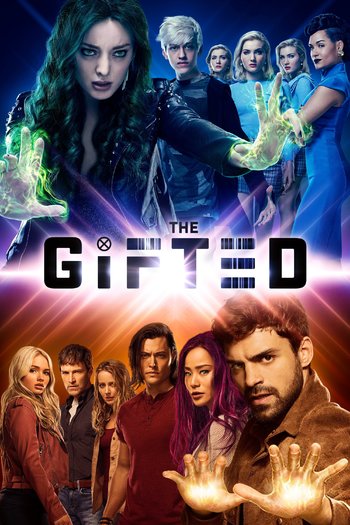 The Gifted is a 2017 superhero Science Fiction series airing on FOX, based on the Marvel Comics X-Men franchise. Created by Matt Nix (Burn Notice), the show is a co-production between 20th Century Fox and Marvel Television, with a pilot directed by Bryan Singer of the X-Men film series.

Set in a Bad Present where the X-Men are gone and anti-mutant sentiment is rampant, The Gifted follows a family on the run from a hostile government agency after parents Reed (Stephen Moyer) and Kate (Amy Acker) Strucker learn their teenage children Lauren & Andy (Natalie Alyn Lind & Percy Hynes White, respectively) are mutants themselves.

With the help of an underground network of mutant rebels —which include Thunderbird (Blair Redford), Blink (Jamie Chung), Polaris (Emma Dumont), and Eclipse (Sean Teale)— the Strucker kids will need to learn how to master their "gifts" and protect themselves from a world that hates and fears them... or else.

The Gifted is notable for drawing inspiration from deeper dives in X-Men lore than have previously been seen in live-action.

The show was cancelled by FOX in 2019 after two seasons after the Disney buyout.

The Gifted contains examples of: