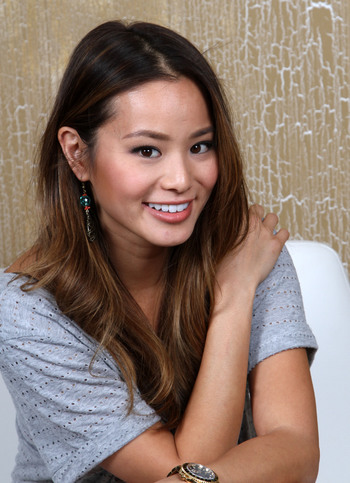 Her career began on The Real World of all things. She was a contestant on The Real World: Sandiego, the fourteenth season of the show. However she has since gone onto bigger and better things - and has had one of the most successful media careers out of The Real World's alumni. Not that it wasn't tough to shake her reputation from it however; she claims she left it off her resume in most of her early auditions. She's also one of the most successful Asian-American actors working in Hollywood today. Though she too still falls victim to the Minority Show Ghetto - as evidenced by the Development Hell for the biopic Eden, which struggled to find investors due to its absence of a White Male Lead. They didn't have to in the end, and Jamie won critical acclaim for her performance.

She's also got Disney cred for her role as Mulan on the TV show Once Upon a Time and as the voice of GoGo Tomago in Big Hero 6 - a role she reprised for the TV adaptation. She's also The Fashionista and you can view her blog 'What The Chung?' here

She is married to fellow actor Bryan Greenberg and they have two children. Despite having the same last name, she's not related to Charlet Chung.